Lasers are familiar to many of us from science fiction (think of the Star Wars light saber) to comedy (remember Austin Powers’ Dr. Evil?).  The fact is that lasers surround us in every-day life.  For example, in the home you will find them in CD players, while industry uses them for high-speed metal cutting machines and measuring devices.  Hair replacement, tattoo removal, dermatologists, eye surgeons — they all use lasers.

So do dentists.  And so does our office. 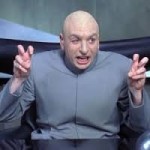 This begs the question, just what is a laser?  How is it different from any other kind of light?  “If Dr. Evil planned to destroy the world with one, why won’t it hurt me when you use it on my gums?!”  Actually, that’s three questions . . . .

The word “LASER” itself is an acronym that stands for light amplification by stimulated emission of radiation.  This concisely describes exactly how a laser works.   The laser is a device which controls the way that energized atoms release photons (a quantum of electromagnetic energy).  When we say “radiation” however, we are not talking about ionizing radiation — such as would be produced by an x-ray.

Laser light is very different from normal light or radiation emitted by an x-ray.  Laser light has the following properties:

Why won’t it burn you to a crisp when we use it on your gums?  Clearly, we’re using a controlled power setting (in our office we use a diode laser) — in fact, most patients tell us they don’t feel anything when we use it in conjunction with their dental cleanings.  But that doesn’t mean it isn’t effective!

Watch the video below for a demonstration and explanation of how a dental laser is being used during a routine cleaning. 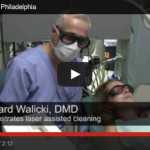 If you would like to read more about how we use a dental laser in our office and how it can benefit your health, check out the following article posted in the Services section of our website: