The Most Affordable Dental Insurance

Recently, a great deal of attention has been placed on economizing in all different aspects of life. Some people have even considered cutting back in the area of health care by putting off routine maintenance care. While this is a little like playing Russian roulette when it comes to dental health — for reasons I’ll explain shortly — there may be a better way to dodge the financial bullet. And it may be a much simpler one.

After more than twenty years of practice I have seen people consider all sorts of ideas to deal with rising dental costs. Often, people become fixated upon dental insurance as the primary solution to the majority of their dental needs. Because dental insurance generally tends to be pretty expensive relative to what it pays out, especially if you are buying it yourself, patients that rely on it exclusively often end up worse than when they started. Dental insurance typically has waiting periods before it can be used, during which time existing conditions advance, becoming more expensive.

In these cases, you have to wonder – if the premiums are costing you more than what the company pays you back – what’s the point? Obviously, this arrangement is a much better deal for the insurance company than for the patient. Let’s also consider that when I first started practice, dental insurance maximums averaged $1,000 to $2,000 annually. Twenty years later, they average . . . $1,000 to $2,000 annually. If insurance kept up with inflation alone, the annual maximum should easily be over $5,000. Don’t hold your breath for that one though. Patients would be better off just setting aside the amount they pay for premiums. They usually come out better in the end. 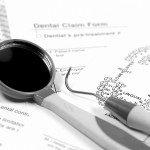 Putting off dental care often becomes more costly to patients for several reasons. Firstly, many dental conditions are actually painless in the early stages. Periodontal disease is a prime example. This is a condition in which the bone surrounding the teeth becomes lost, leading to a variety of circumstances including bleeding gums, loose teeth, bad breath and, eventually, tooth loss. It is the number one reason that people loose teeth world-wide. For the most part, it doesn’t hurt. When it does, if it does, it is usually too late. The tooth or teeth have to come out.

Likewise, dental decay usually doesn’t hurt in the early stage. Actually, I’ve lost count of the number of times it didn’t hurt in the advanced stage either – but this is usually the point at which the patient becomes aware of a problem. A piece of the tooth breaks off, or they actually experience pain. The tragedy of this scenario is that when it reaches this stage teeth often end up requiring more expensive root canal therapy or extraction. Dental costs can very quickly escalate as much as ten times from the cost of a simple filling to what it costs to complete a root canal and crown.

So what do you do? Focus upon prevention.

Here is a true story I hope will leave as big impression upon you as it did me at the time:

When I was a dental student, I recall a lecture give by one of my professors in which he made a powerful point on the subject of prevention. The seminar dealt with the subject of prosthetics – more specifically, the fabrication of crowns and bridges. This professor, however, was one of those rare dentists who actually had two recognized specialties. He was a professor of prosthetics, but he was also a periodontist. While this was a crown and bridge lecture, he taught us a very valuable periodontal lesson.

Here’s what he did. The seminar was pretty informal at this point. The professor told us he was going to put up some slides of patients and have us guess their ages – just by looking at their x-rays and then at pictures of their gums. As a student, I remember thinking this was a refreshing little game and most of the class was doing quite well calling out the ages. Looking at the x-rays, we would evaluate bone levels, tooth eruption patterns, tooth wear, number of restorations and similar factors to make our “guess.” Then we would look at the color and texture of the gums and appearance of the smile and offer up our estimate. The professor would then show us the face of the patient and tell us their age. This went on for a while and we all did pretty well.

He then put up the next slides and guesses rang out: “twenty-five,” “thirty,” “twenty-seven,” went the typical guesses. I don’t think I can remember seeing a single filling on those slides, though there could have been. Nothing changed when he showed us a picture of the gums. They looked like a teen-ager’s. Then he put up a picture of the face. The person pictured was obviously in their late seventies, maybe even early eighties.

Dead silence. Then there was a small commotion and most of the class pointed out that the slides got mixed up.

The professor paused, and said “No. This is correct. Let me tell you how I can be sure. This is a picture of my father. Those are actual x-rays and a recent picture of his gums. How is it that he has such excellent oral health?” 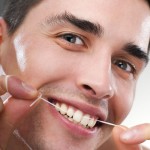 He then went on to tell us how when his father was a younger man, he had a visit with his dentist and he complained to him that whenever he ate, he would get food stuck between his teeth. His father wanted to know if there was anything he could do about it, because it was pretty annoying.

The dad’s dentist thought about it for a second and told him: “Well, I’ll tell you what I do when that happens to me. I go over to my wife’s sewing kit and take out a piece of silk thread and just pass it between my teeth.” As a student, I wondered when floss became invented. Evidently, it just wasn’t popular back in those days.

In any case, our professor went on to explain that his father did exactly that after every meal since he was a young man. His gums, teeth and bone levels were almost unchanged. That’s what he had to show for his efforts.

I filed the image in the back of my mind, but I have to be honest – I didn’t exercise the same level of commitment – just yet.

Oh, sure, I brushed, watched what I ate, and took vitamin and mineral supplements. But my flossing was sporadic. That is, until I really started looking at what happened to my patients and how those who flossed performed against those who didn’t. If you asked me today: do I floss regularly? Absolutely. You can’t buy cheaper dental insurance.

Flossing benefits your gums, your breath, your teeth, your lungs, your heart – in short, you.

Do you know that probably up to a third of the cavities I treat happen between the teeth? This is why regular exams are so important. You simply can’t see this area. For that matter, without x-rays, neither can I in most cases. But my point here is simply this: even if you brush after every meal and snack, without flossing this area never gets cleaned. Why would anyone become surprised that an area that never got cleaned could decay over time?

There are all sorts of reasons people don’t like to floss, but the reasons to do it are actually pretty compelling and very cost-effective. Think it over. Maybe floss is the most affordable dental insurance. . . .