What?! Is the sky falling? What dentist would dare utter such blasphemy!

Stick with me for a moment. You may learn something about flossing.

Here are the facts as I see them after more than twenty years in dental practice: 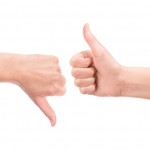 Another observation I have made about flossing regards what people think flossing is. I will sometimes hand a patient a piece of floss and ask them to show me how they floss.  Without exception, I have seen patients pass the floss between their teeth and then pop it back out.

Add to this the fact that most patients will only perform this routine once in a while. If you call that “flossing” I say don’t lose sleep over the fact that you are not flossing regularly. That can be effective at pulling food out from in between your teeth, though, so feel free to do so. But if that’s not flossing, just what is it, really?

Flossing is the action of taking a length of floss – either the conventional “string” kind or pre-threaded on a fork-like device – and then passing it between your teeth while holding it in a “C-shape” against the side of the tooth. You then take the floss and rub the edge of the tooth, sliding it all the way under the gum-line in an up and down motion. How often can one do this? After every meal would not be too much. But if people did this at least once a day, the average case would see dramatic results after an average of two weeks of daily flossing.

If you haven’t been flossing regularly here is what you can expect: your gums will bleed when you start to floss. It is also likely to be a little uncomfortable at first. But over time, the bleeding should stop. If you haven’t had a dental checkup and cleaning for a while, it is a good idea to do so this first. Flossing against existing tartar will be an unending battle. Once the teeth are clean, however, daily flossing will usually result in pink, firm and healthy gums that don’t bleed. Other benefits? Fresher breath and reduced inflammation – which also means a lowered chance of heart attack and stroke.

If you only floss once in a while, though, inflamed gums will likely never get up to a point where the occasional activity makes any difference. So, if you don’t make it a discipline, why bother? But if you would like healthy teeth and gums for a lifetime, start flossing today!