Cracked Tooth: Yet Another Example

Just last week I encountered another case of a cracked tooth needing to be extracted.
I can’t say this is uncommon. Yet something about this one stuck with me . . . probably because I felt it was avoidable.

Cracked teeth as a result of the grinding and clenching of teeth — also known as bruxism — appears to be reaching epidemic levels. Frankly, that wasn’t the only case of of problems I saw as a result of tooth clenching that day.

The patient I treated right after him had a series of problems connected to clenching as well: among them, bone loss — (with at least one tooth that will have to be removed as a result), front teeth that were chipped, and another that that developed an abscess. Yes, all of these problems had direct connections to the patient’s habit of clenching his teeth. 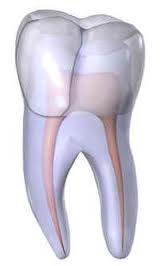 But let’s return to original patient for a moment. When he first came in and saw me for his initial consultation six months earlier, I pointed out that there was evidence of bruxism. I recommended doing something about it at that time.

The patient looked at me funny — it was clear that he didn’t think he had that problem. I explained why I thought he clenched his teeth and pointed to several things that indicated that condition. He handled a few other problems, but decided to let this one go (“for now”). I’m not going to put a gun to anyone’s head when it comes to my recommendations, but inwardly I wished him good luck.

While conducting my follow-up exam I observed a crack running through his root. Given it’s size and location, his only option is removal. It didn’t hurt him as much as it could have because the nerve had already been removed, but I couldn’t help thinking this was a shame. Had we followed the recommendations I made six months ago, we probably wouldn’t be dealing with this now.

It’s too late for that patient, but the underlying message here is simply this: if a dentist tells you there is a body of evidence suggesting you grind your teeth — don’t ignore it. Most people simply don’t know if they grind because they often do it while they are sleeping. What is more, they don’t do it consistently. Remember, damage can occur in many different ways. It can be slow and steady, like wind erosion wearing down mountains or very quick and short-term, like a bullet to the head. Either way, there is visible change in the end.

Here is a link to an earlier article I wrote about grinding. If a dentist has ever told you that you might grind or clench your teeth, take it to heart. You may be saving yourself a few dollars . . . as well as a few teeth.