Implant or Bridge? How to Decide (Part 2)

OK. So let’s say it has been decided: you are a candidate for an implant.

You may have heard that getting an implant can take a long time. By contrast, you can have a bridge to replace your missing tooth in about two weeks or less. Isn’t that better?

Not so fast. It all depends. 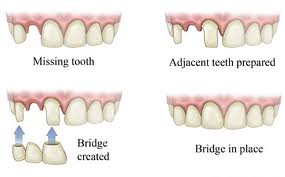 Let’s look at a couple of scenarios. If you are replacing only one tooth and have two adjacent teeth here is what you should consider:

In order to place a bridge, you have to shave down those teeth so that they will support the bridge. This limits their longevity and may open the door to the need for additional work, such as root canal therapy in the future.

You should also understand that bridges don’t last forever.  The national average, according to university studies and insurance company estimates, is only five to fifteen years. If, you are in your twenties, a bridge can turn out to be much more costly over your lifetime.

Let’s see how this plays out:

For the sake of argument, consider that a person has lost their first molar. The 2013 national average price for crowns (the individual units that make up a bridge) was about $1160.  Since our hypothetical bridge has three units, that adds up to $3,480.  If existing fillings need to be replaced due to decay, it could cost another $500.  And if a root canal is needed because the filling is now closer to the nerve, this can cost as much as another $1,100 for a molar. Suddenly, the total bill can exceed $5,000 using our example.

In five to fifteen years the bridge may need replacement. Let’s be generous and say it lasts fifteen. Between the ages of 25 and 85, that’s four replacements – nearly an additional $14,000 – if nothing else is needed.

In the long run, replacing one tooth using a bridge can cost nearly $20,000 over your lifetime. And that’s assuming it is still in a condition that permits a new bridge.

What if instead we replace the tooth with an implant? At today’s rates, a traditional root form implant runs between $1,800 and $2,000 in my area.  An abutment (that’s the part which ties the implant and the implant crown together) will range in price from an average of $850 to $1,200.  Prices for implant crowns vary widely – though many dentists charge the same fee as they do for regular crowns. In this example, we’ll use the fee given above, so $1,160.

The difference? That implant (barring situations like an accident causing physical injury to the implant) has a good chance of lasting a lifetime. That’s a lot less than $20,000 over time if you go the bridge route.

I have had patients react in various ways to this analysis. Some tell me “I really don’t want to wait three to nine months, while wearing a temporary partial, for the implants to be ready.”  Others have said, “Well, if I’m going to have to replace a bridge down the road, or even end up with an implant later anyway – I might as well just do it now.”

Both arguments have their merits. But at least now you have some information that can help you make an informed choice.