I Never Thought It Would Happen to Me

I have little doubt that some patients who visit a dentist and are told they have decay, but don’t experience any symptoms, are convinced that someone is trying to pull the wool over their eyes.  There are probably several reasons for this.  Possibly, they had been to some unscrupulous person in the past who suggested they had a problem, when they really didn’t.

I can see how that might create skepticism. I mean, it’s conceivable that sort of thing could happen.

But even if that were the case, I sincerely don’t believe it represents the behavior of a majority of dentists.  Most of the dentists I know genuinely care about what they do and the people they treat.  So maybe these skeptics are just people who don’t trust anyone.  I don’t know. 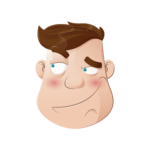 The reality, though, is that these patients will eventually be in for a big surprise when the you-know-what hits the fan.  Or – and let’s keep this a family column — when the decay hits the nerve.

But that could take a while.

And I believe that could be where some of the problem lies. A  patient tries to use this to their advantage — they want to buy some time.  After all, it’s not really being a “problem” for them in that they don’t perceive anything as being different.  When the problem eventually does occur, I usually hear: “I never thought it would happen to me.”

A doctor detecting treatable decay usually recommends that the patient handle it at their earliest opportunity.

Why? Well, the patient can catch the problem when it is small, when it is less likely to cause post-operative discomfort, and when it will generally cost them a lot less.

But, first, let’s back up a little and explain why it’s possible to have a cavity – several in fact – and have absolutely no symptoms.

Most decay starts on the outer surface of the tooth called the enamel.  It’s roughly 97% mineral in consistency and does not contain nerves.  That means it has no feeling.  Practically zero.  Your dentist could DRILL on that part of the tooth and most of the time you won’t feel it.

Notice that in the earlier paragraph I mentioned “treatable” decay.  Well, when would decay not be treatable right away?  I can’t speak for other dentists, but I typically won’t treat decay when it is confined to the enamel.  Why?  It has the potential to re-mineralize.  In other words, it has the capacity to fix itself – that is, if you don’t continue to do the things that led to the cavity in the first place.  Usually, this is related to your diet, but it can be affected by hormones, or even medications.

Why not mention home care first?  Isn’t that important too?  Of course it is.  It just may not be the most important factor.

Another time a dentist might not treat a cavity could relate to the age of the patient. For a much older patient, there are times when the pain or infection are not likely to come up before the patient passes.  Of course, your dentist doesn’t have a crystal ball on that point.  (Well, probably not.) But, it wouldn’t make sense to recommend treatment in the majority of those cases.

And this takes us back to the nature of a cavity.  They often take a long time to get bigger. (But not always…. Again, no crystal ball here.)  The reason has to do with the hardness of the enamel itself.  Enamel, for you trivia lovers, is the hardest substance in your body.  It’s harder than bone, and that property, along with the lack of sensation, can be problematic.

Here’s why: a cavity is often quite small on the outside of the tooth.  It’s actually difficult for decay to work its way through that hard enamel.  Most of the time it burrows a narrow channel down to the dentin (only a couple of millimeters away) and then it really starts to spread.  Because dentin is softer than enamel, it’s just easier for it to spread more quickly there.  By the way, this additional, and deeper, decay – very often still doesn’t hurt – as long as it is far enough away from the nerve.

Meanwhile, your enamel is, for the most part, continuing to hold its form.  That stuff is hard.  But things are generally hollowing out on the inside of the tooth now — out of sight and out of mind — as the decay continues to spread. Painlessly.

Eventually, your tooth can become very much like an eggshell.

Then one fine day you bite on something, and the hard enamel that was still doing its job holding the form of the tooth caves into the hole below.  It just got too thin. 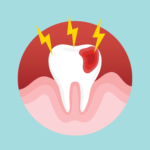 Now, at this point, does the skeptic understand that he got a cavity?  Sure.  Some of them finally get it.  But for others –no!  It’s more like: “Hey that blowhard dentist was obviously wrong because he talked about me having cavities years ago, and look – I did fine until now.  In fact, I probably just lost a filling!  Jeez, this hole just came out of nowhere.  It’s probably the fault of some earlier dentist.”  (Um, Mr. Skeptic never got the filling though.  Remember?)

Now you are going to be missing a tooth, and may lose even more teeth as a result.  Yet, when the doc first mentioned it, that cavity was only going to cost $150.  How can it suddenly become sixteen times more expensive?!