What if a person could reduce tooth decay by 25%?  That would be pretty good.  Don’t you think?

How about if YOU could suffer 40% fewer cavities?

Would that get your attention?

Dentists have been tackling the tooth decay problem for decades.  There have been many theories and various approaches.  These range from focusing upon home care, to controlling dietary factors, to using chemical agents such as chlorhexidine and fluoride.

Most of us would agree – a 25% to 40% reduction in tooth decay would be desirable.  But, what if – and without too much effort – a mother could see her five year old child reduce their tooth decay by as much as 70%?  (This reduction is compared to children given a fluoride or chlorhexidine varnish.)

Simply put, that is a BIG deal.

Still other studies have shown that mothers who chewed xylitol gum two to three times a day, starting three months after delivery and until their child was 2 years old, reduced the levels of cavity-causing bacteria in their children up to six years of age.

The secret?  The mothers were chewing  xylitol gum.

What is xylitol?  It’s a sugar alcohol sweetener that is naturally occurring and can be found in the fibers of various fruits and vegetables.  Most commonly, it is extracted from corn husks and birch.  It is both tooth-friendly and diabetic friendly.

What makes it so special?  Unlike sucrose, or common table sugar, xylitol does not ferment – a process which results in acid formation that breaks down tooth enamel.  To the contrary, the organic structure of xylitol allows it to help remineralize enamel before decay has time to form.  Saliva containing xylitol is also more alkaline than saliva exposed to some other sweeteners, so is not as likely to produce decay.  Additionally it has other chemical properties that help to remineralize the teeth.   Studies conducted in Finland in the 1970s showed that people who chewed sucrose gum had nearly three decayed, missing, or filled teeth, compared to roughly one such tooth in a group chewing xylitol gum. 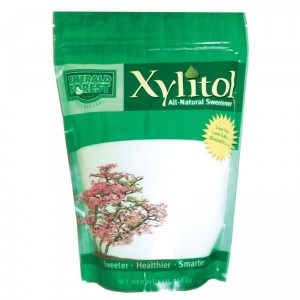 Xylitol also has a more specific anti-bacterial action which could also be responsible for controlling tooth decay.  It is known to inhibit the Streptococcus mutans group of bacteria, which are significant contributors to the process which results in cavities.  Because it also inhibits Streptococcus pneumoniae, and Haemophilus influenzae on nose and throat cells, it can also be used as a nasal spray.

The FDA permits xylitol to be marketed as a product which does not promote tooth decay.

Are there any risks?  While there is no known toxicity to xylitol in humans, if taken beyond a person’s individual threshold for this type of sugar alcohol, temporary gastrointestinal (GI) side-effects such as bloating, gas, and diarrhea can occur.

Generally, these effects diminish and a person’s threshold for xylitol use without the laxative or GI effect increases over time.

An important note for dog lovers:  dogs that have consumed high levels of xylitol (greater than 100 mg per kilogram of body weight) experienced drops in blood sugar that could be life-threatening.  Very high levels (500 to 1000 mg per kilogram of body weight) have also been tied to liver failure in dogs.  Xylitol does not appear to have the same effect on cats, and it has also been acknowledged as capable of reducing plaque and tartar in cats when added to their water.

Xylitol is available in toothpastes, mouthwashes, nasal spray, chocolates, mints, jams, lollipops, and in granular form.  When used as a sugar substitute it is typically used in the same ratio as one might use table sugar.  It also tastes like sugar, but without the aftertaste associated with many other artificial sweeteners.

Where you get your xylitol may be an additional risk factor, however.  Some readers may be familiar with a recent (FDA) warning to consumers to throw out all toothpaste made in China after the agency found a poison commonly used in anti-freeze in the toothpaste it evaluated in three U.S. cities.  Unfortunately, there have been similar concerns about Chinese xylitol.

If buying from a domestic distributor, you may want to check the source of the xylitol.

Also check to make sure your “xylitol” gum isn’t mixed with aspartame, a potentially dangerous sweetener with many reported side effects including memory loss, brain lesions, and multiple sclerosis to name just a few.

So how much xylitol gum do you need to consume to get cavity-fighting benefits?  Most studies suggest about six grams are needed in order to get a result.  That translates to roughly twelve pieces of gum a day.

Hmmm.  Several hours in the dental chair or chew gum six times a day?  You decide.